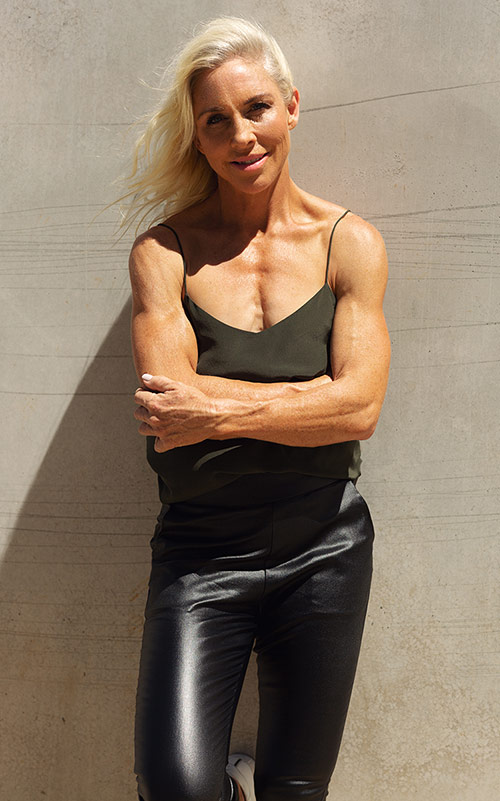 Although I was involved in Little Athletics at a state level, at age 14 I left behind athletics to focus on my studies. I did however always run, almost daily throughout my life, and running became even more important to me as a stress management tool after my youngest daughter was diagnosed with severe autism in 2006. Having a child with a severe disability is a marathon of its own, but I started to run half and full marathons as a way to build mental strength and endurance to deal with the daily challenge of taking care and teaching my daughter.

By chance, while working out at the gym in 2017 (aged 49) and training for the Rottnest Marathon, a guy approached me to discuss my running and asked me if I’d ever considered sprinting. I liked the idea of reduced training times which was extremely challenging when training for marathon events and taking care of my daughter, not to mention the sheer excitement of sprinting and competition. I’ve always loved weights and being in the gym too, so sprinting held a lot of appeal for me.

I enrolled in WA Masters Athletics and began competing in weekly competition and then joined Block Athletics, where Darren Rogers has been overseeing my training since March 2018 and been a wonderful mentor and support.

Malaga was my first event and it was magical – the Spanish autumn, the first time ever away from my daughter for more than a few days, and after making the semis for the 100 and 200m, was selected for the 4 x 100m and 4 x 400m relays, an incredible honour. Along with Stefanie Noon, Julie Brims and Jackie Bezuidenhout, we took gold and silver in the two events respectively, as well as Australian records in both, and were only 0.4 seconds off the world record in the 4 x 100.

I anchored in the 4 x 100m and got the honour of passing the Americans in the last five metres and crossing the line by 0.4secs ahead and taking the gold medal. Without a doubt, it’s the most exciting moment of my life and ignited in me a passion for sprinting and a huge desire to improve.

I made so many amazing friends in Malaga and were inspired by so many people. Having a child with a disability can be the most isolating and lonely experience and for much of the last decade I’ve been dedicated to my daughter’s progress, but Malaga for me was the first time that I’ve ever felt part of a community of supportive, positive and people committed to health and being the best people they can in competition and beyond. I want to acknowledge John Wall for his counsel, support and encouragement to go the Pan Pacs on the Gold Coast in November. Bring it on!